Since Shadow Moon releases on the 29th, I wanted to do something special to honor the bisexual protagonists out there. I decided to focus on indie authors, specifically those within the urban fantasy, paranormal romance, and fantasy genres.

Throughout the month, I’ll put up posts similar to this one, outlining a few bi-centric books you might be interested in. I would have loved to make some sort of master list, include more genres, but given the workload and the fact that I only want to recommend books I’ve actually read, I hope this shorter version will do 🙂

Before we get to the good stuff, I just wanted to point out that as a bi person, I consider myself attracted to people of the same and different genders. Plural.

(Actually, the way I truly see it, is that I don’t care about the gender of a person, only the person themselves. That defines my attraction to them. But for the sake of having a concise, widely accepted definition, let’s use the one above, shall we?)

Well, that being said, I simply wanted to share that, yes, if you use the term pansexual for those who are attracted to more than two genders, then such characters will most definitely be included.

And now for the books!

(And if you find yourself wanting to read them, clicking on the covers will take you to the title’s Amazon page)

Matthew Callahan has spent seven years struggling against the insatiable hunger for blood consuming him. Unable to stop the vampire inside from preying on humans, he keeps himself confined to a lonely existence.

Everything changes the night he is lured into a trap and taken prisoner by High Lord General Tarrick—a seductive incubus who feeds off sexual energy. Forced into the middle of a war between vampires and incubi, Matthew is used as a weapon against his own kind. Although he’s desperate for freedom, he is unable to deny the burning desire drawing him to the incubus general he now calls Master.

Personal commentary: Dark, devastating, and utterly compelling! Although be warned, as the title suggest, with captivity, torture, and non-consensual master-slave relationships, this is a story only for those who don’t mind a seriously dark edge to their romances.

My name’s Kaitlyn Felis, and I’m a treasure-hunting alchemist.

I was given the opportunity of a lifetime to work for a mysterious elf called Fein Thyrin. Not only did he give me my dream alchemy lab, one that came with a beautiful part-nymph assistant (she’ll be the end of me, in the best possible way) he’s also hired me as his personal treasure-hunter. To say I was excited is a drastic understatement.

First on my treasure-hunting list? The Seers Stone – it’s a thing of legends, and I’m going to be the first hunter to get my hands on it.

Personal commentary: This was like Indiana Jones on alchemical crack! Such a fun, adventurous read, with characters I couldn’t help falling in love with.

The Pleasure Hound by N.S. Johnson 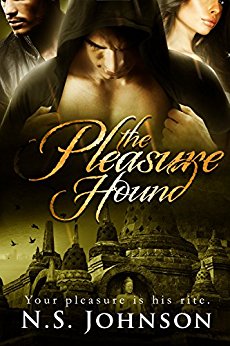 What starts as a simple ritual soon turns carnal when a monk falls for a young woman under his tutelage.

All her life Chanyn has wanted to find her one true love. When she encounters the dashing Lord Dain, with his kind eyes and pure heart, she believes her dreams of love are finally coming true. Until she meets with the roadblock that is her betrothed’s bondmate.

In a world where men outnumber women ten to one, Khial never thought he’d have to contend with a woman entering his bond. He gave his heart to Dain when they were just boys and has been by his side every day in sickness and health. These days it’s mostly in sickness as Dain’s health deteriorates. Though his attraction to Chanyn increases with every encounter, Khial can’t help but resent the young woman who comes into his love story to play the hero, but marriage to her may be the only way to save the man he loves.

To prepare Chanyn for her union with the two males, Lord Dain hires a Pleasure Hound, an ancient order of monks tasked with instructing new husbands, who have little to no contact with women, in the art of female pleasure. Years ago a scandal left the Temple of the Pleasure Hounds near destitute. The young monk responsible for the scandal is given a chance to redeem himself and the temple when he is called upon to train the bonded triad in the orgasmic arts. But what starts as a simple ritual soon turns carnal when the monk’s heart begins to yearn for Chanyn, and hers for his.

Personal commentary: I can’t tell what, exactly, I had been expecting when I started reading this (honestly, it was the title got me intrigued!), but finding myself all teary-eyed over a heartbreakingly beautiful romance definitely wasn’t it. This novel is absolutely sensual and with more tender hope sprinkled across its pages than anything I’ve read of late!