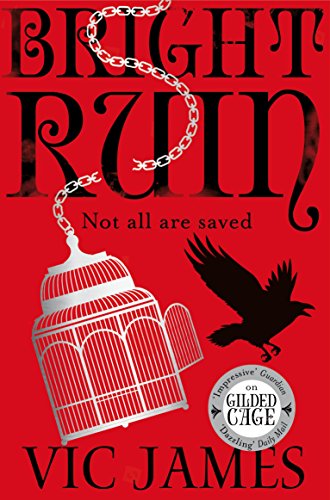 A shattered country
A world-changing magic

Magically gifted aristocrats rule Britain, and the people must serve them. But rebellion now strikes at the heart of the old order. Abi has escaped public execution, thanks to an unexpected ally. Her brother Luke is on the run with Silyen Jardine, the most mysterious aristocrat of all. And as political and magical conflicts escalate, each must decide how far they’ll go for their beliefs.

Dragons clash in the skies, as two powerful women duel for the soul of Britain. A symbol of government will blaze as it dies, and doors between worlds will open – and close forever. But the battle within human hearts will be the fiercest of all.

Do you have a series that you consider perfect? Like whoah-how-is-this-even-possible-perfect?

That’s the Dark Gifts trilogy for me.

Let me start off this review with a brief anecdote. When my pre-ordered copy of Bright Ruin arrived on Monday, I literally dropped what I was doing (sorry, Shadow World edits), snatched up the book, and said “Screw work.”

I read it from start to finish that day.

Then needed a full day and a half to recover.

Yes, it was that good.

It’s a sad fact that, more often than not, I’m let down by the series finales. Usually it’s either the storyline itself or the very ending that just isn’t quite on par with the previous books or (which I know is utterly personal) doesn’t meet my own (probably too high) expectations. That wasn’t the case here.

I honestly can’t review BR without commenting on the trilogy as a whole, because that’s precisely what it is. An impeccable story broken into three utterly fulfilling parts. James never drops the ball, never wavers. Her characters are distinct and true to themselves even as they grow or change paths/views, the writing flawless, and the world opening up (as well as bringing to light more details) with every passing page.

The way James weaves politics and social issues into a modern fantasy world that resonates ours, yet is undoubtedly its own entity, is a feat all on its own. Coming from someone who isn’t big on politics in real life or fiction, I was surprised by just how much I enjoyed this aspect right from the very start. It’s rich, well-developed, and inexplicably tied to the individual storylines. Organic, without once becoming overwhelming or dry. I devoured the politics with the same enthusiasm as I cared for the characters’ fates.

Perhaps to sum everything up before my love goes out of hand:

Bright Ruin is the pinnacle where everything, every little crumb we had been given throughout the story, converges. A spectacular, fulfilling ending that crowns the brilliance that is James’s world.

From the first page to the very last, the Dark Gifts trilogy is an exceptional work of fiction that I hope will inspire, entertain, and touch readers for decades (better yet, centuries) to come.